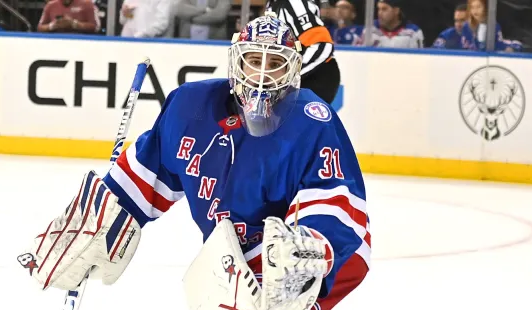 The New York Rangers beat the visiting Montreal Canadiens 2-3 at Madison Square Garden to improve to 10-3-3 record for the season. While the Rangers managed to secure the home victory before their own travels Up North, it wasn’t easy. Shesterkin had to make 31 saves for the night to keep the score favorable for New York, while Gauthier’s goal in the 3rd brought the thin margin victory.

The first period started good for the Rangers, lot’s of back-and-forth, but neither the Canadians, nor the Rangers, had any luck finding the back of the net right off the bat. But it didn’t take long for New York to open the tally for the night. A Panarin-Strome assist lead to Kakko scoring the first goal for the night and NYR were seemingly off to the races. Both Shesterkin and Primeau were solid in front of the goal and the 1st period ended with the sole goal by Kakko.

The second period was equally contentious, with the goalies once again keeping the score at 0-1 for most of the period. It wasn’t until the 17min that the Rangers managed to find the net once more. Chris Kreider delivered after a nice assist from Mika Zibanejad, and the Rangers were already two up at Madison Square garden. The joy of the fans was short-lived, however. Just over a minute later Christian Dvorak finally managed to beat Shesterkin and the Canadiens were back in the game that quickly.

The 3rd was even more taxing on the Rangers’ fans cardiovascular system. The period opened with the already familiar intensity, but the puck just couldn’t sneak pass either of the goalies. To make matters worse, the Canadians drew level with a Josh Anderson goal at the 17:42 mark. Luckily for the Blueshirts, Montreal’s jubilee didn’t last long – Julien Gauthier taking it upon himself to give the Rangers back the lead with less than two minutes left, allowing the Canadians all but 30 seconds to enjoy Anderson’s goal. The Rangers managed to hold off the Canadiens for another two minutes and secure the “W” from the home game.

While last night’s victory saw the Rangers improve their winning streak to 4 games, sitting at the 3rd spot on the Metropolitan Division’s table, next game will have the Blueshirts traveling to the Maple Leafs, a much tougher opponent than the Canadiens. Toronto has also won their last four games and are holding 11-5-1 record. No betting odds have been posted on the Maple Leafs – Rangers game yet, but we fully expect to see New York as the underdog of the game with the sportsbooks.